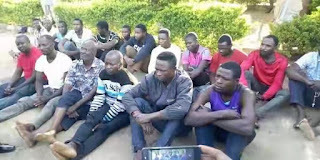 The 19 suspects included 17 teenagers, a village head and a woman.

The suspects were said to have conspired to attack and killed late General Alkali on the 3rd of September while traveling from Abuja en route Jos to Bauchi.

Prosecution counsel, Barr Emmanuel Achoba moved the application for ex-parte and same was granted by the court.
There after, the charges were read out to the accused and they all pleaded not guilty.

The prosecution counsel then asked for an adjournment to enable them bring witnesses to prove the case and further requested that the accused be remanded in prison custody.

The court granted the prayers and adjourned the matter to 10th December, 2018 for hearing.

The presiding judge, Justice Daniel Longji after adjourning the case ordered the suspects to be remanded in prison custody until the case come up for hearing on 10th December next month.

But now that the suspects have been arraigned and have been remanded, I can now have access to them and prepare for the case proper and for their bail at the next hearing. We can’t proceed further than this because I don’t have access to them before now”
on November 06, 2018
Email ThisBlogThis!Share to TwitterShare to FacebookShare to Pinterest