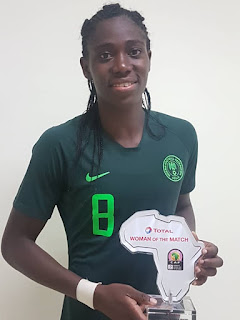 Super Falcons forward, Asisat Oshoala was named woman of the match following her sparkling display in the Nigerian ladies’ 6-0 win against Equatorial Guinea at the 2018 African Women’s Cup of Nations on Saturday, reports Completesportsnigeria.com.

Oshoala grabbed a hat trick in the encounter as the Super Falcons booked a place in the semi-finals with the win.

Oshoala is the second Super Falcons player to be named woman of the match at the ongoing AWCON 2018 tournament after Ordega picked the award in Nigeria’s second Group B match against the Shepolopolo of Zambia.
The Super Falcons will face the Indomitable Lionesses of Cameroon in their semi-final clash at the Accra Sports Stadium on Tuesday.
on November 25, 2018
Email ThisBlogThis!Share to TwitterShare to FacebookShare to Pinterest