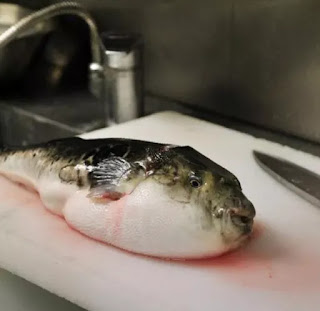 The National Agency for Food and Drug Administration and Control (NAFDAC), on Thursday, cautioned the general public against consumption of Puffer Fish.

The Director-General of NAFDAC, Prof. Moji Adeyeye, gave the warning in a statement in Abuja.

A puffer fish is one of the many species belonging to the Tetraodontidae family of marine and estuary fish. It’s also called blowfish or fugu in Japanese, among various other names. In all fairness, a puffer fish can actually be eaten safely despite being known as a deadly fish. But you can do this only if (with emphasis on the IF) you know how to prepare it properly. You just have to identify the lethal organs and know how to remove them.

The liver, skin, eyes, kidney, intestine, and ovary of a puffer fish contain tetrodotoxin (TTX), a substance known as one of the most toxic poisons found in nature. It is far more lethal than a cyanide. Each puffer fish has different concentration levels of TTX. But according to scientists, even a little dose of 1 - 2 milligrams of purified toxin can be fatal. And a gram of fugu is enough to kill 500 people. Unfortunately - and this is the sad part - there is no known antidote to it yet!

"Adeyeye explained that the fish might contain the potent and deadly toxins tetrodotoxin and saxitoxin, which could cause severe illness and death.

She said that some organs of the fish, such as liver and gonads (ovaries and testes), the skin and intestines typically contained the toxin. According to her, cooking or freezing cannot destroy the toxin."

She added that freezing and thawing of the product prior to removal of the toxic organs might result in the migration of toxin into the flesh of the fish.

“Restaurants and fish sellers are warned not to serve or sell this fish also known as puffer, swellfish, fugu, globefish or sea squad among other names, as this will severely endanger public health.

Due to the potential health hazard associated with the fish, NAFDAC does not allow importation or sale of puffer fish. And we hereby alert the general public on dangers of consuming PUFFER FISH,” she stated.
on November 02, 2018
Email ThisBlogThis!Share to TwitterShare to FacebookShare to Pinterest