University Student Celebrates Her Graduation By Posing With A Massive Alligator 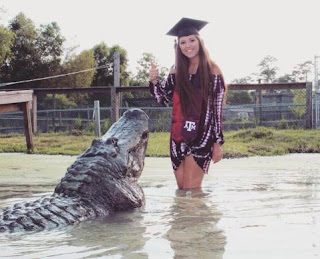 The daring 21-year-old's graduation ceremony will be held this coming Friday
A university student took her graduation photographs to a whole new level – by posing alongside a 13-foot alligator.

Makenzie Noland’s daring snaps have left the world stunned after the Texas A&M graduate took an unorthodox route for her commemorative photos.

The 21-year-old graduate earned her degree in wildlife and fisheries science, and has been working as an intern at the Gator County rescue centre in Beaumont, Texas since finishing classes in May. 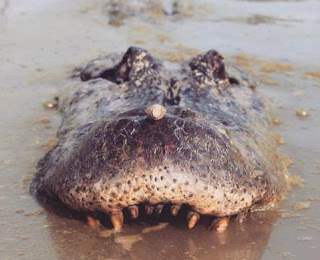 Makenzie balances her graduation class ring on the alligator's nose
She posted the photographs on her Facebook page with the caption “Not your typical graduation picture”.

One of the photos shows Noland balancing her graduation ring on the nose of the alligator, named Big Tex, while wearing her Texas A&M sash and cap.

Noland developed a special bond with the animal after working closely with him since her first day at the animal centre.

The graduate is responsible for Big Tex’s daily feeding sessions, which often attract a large crowd, and the beast has never attempted to harm Noland. 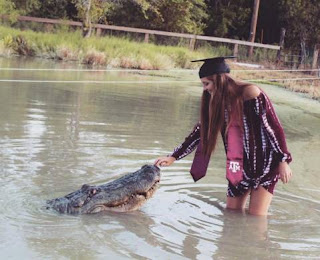 Big Tex, seen here balancing the ring on his nose, is said to be 'a little too friendly'
Speaking to the Wichita Eagle, Noland said:  “He’s one of my best friends here. It’s something I’m super proud of.
“It took him a few weeks for him to like me.”

She added:  "I call him over, talk all sweet to him, tickle his nose, and reassure him that I'm not going to hurt him.”

The alligator was caught at Trinity River National Wildlife Refuge in Oct. 2016 after he started becoming “a little too friendly,” according to a Facebook post from the refuge.

The post claimed that Big Tex had  “lost his fear of humans” because people were feeding him, adding:  “While the animal had not aggressively attacked anyone yet, it was considered a little too close for comfort.”

Big Tex was captured and now gets to  “live the remainder of his life at Gator Country".

on October 22, 2018
Email ThisBlogThis!Share to TwitterShare to FacebookShare to Pinterest