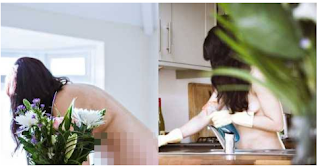 A 24-year-old naked cleaner who cleans homes in the buff to earn extra cash has divulged what the job really entails.

Anna, who wants to keep her identity a secret, has been cleaning in the nude for the last three months and says it makes a nice change to working in a stuffy office all day.

She is part of Naturist Cleaners, which provides professional cleaners who visit clients’ homes or offices to clean and do other household chores while completely nude.

And she earns £45 an hour for her naked duties, reports Wales Online .

The company was founded by Laura Smith in 2017 in response to what she says was “a growing new interest in nude cleaning in British society”.

Despite having never been to any naturist events before, Anna – who says she feels comfortable being naked, and is often nude around her close friends – signed up to the service.

“I was new to naturism. I had never done it before – I hadn’t even been on a nudist beach or anything like that. I’d just done it in private. I wasn’t nervous because I’m quite comfortable being naked.

“I found the first time quite liberating if anything, because I like being naked. If I’m by myself or with my close friends or a boyfriend, I’ll walk around naked. I’m not sure exactly why I like it, I just feel more comfortable that way.

“It was in a flat. I did some hoovering and some dusting. Just really simple stuff, I cleaned their bathroom as well. It’s a nice change after being stuck in a stuffy office all day.”

Anna says she can have between three to four cleaning jobs a week, earning around £45 an hour in the nude, as well as £23 an hour to clean with her clothes on, though she’s only ever had one fully-clothed job.

“All the clients I’ve had are single men, who live by themselves. They’re all different ages, from about their late twenties to fifties,” she said. “They’re usually quite professional men.”

They also make it clear that the service is not and should not be treated as a sexual service.

“I wear normal clothes [to the job], I usually just wear jeans and a hoodie,” Anna said. “I ask the client to confirm that there’s nobody else in the house and that they’re there by themselves. And that they’re not recording. I take the payment and I ask them what they want me to do.”

Anna then takes all of her clothes off and begins cleaning.
on October 11, 2018
Email ThisBlogThis!Share to TwitterShare to FacebookShare to Pinterest