The Leicester City owner's helicopter has crashed in a car park outside the club's ground shortly after taking off following a match. 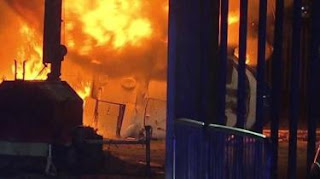 It is not known if Vichai Srivaddhanaprabha was in the helicopter at the time.

Leicester City had been playing West Ham United in the Premier League at their King Power stadium. 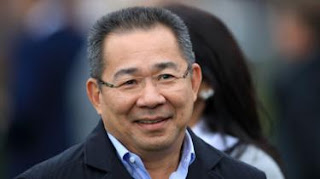 Vichai Srivaddhanaprabha
Pictures from the ground showed a large fire in the car park, which has since been put out.

A Leicestershire Police spokesman said emergency services were dealing with an incident "after an aircraft came down in a car park behind the ground".

Leicester City said the club was assisting police and emergency services and would issue a more detailed statement in due course.

Sky Sports News reporter Rob Dorsett said the helicopter took off from the pitch, as it does after every game.

He said that after a few seconds it appeared to lose control and crashed into the car park just a few hundred metres away.

on October 27, 2018
Email ThisBlogThis!Share to TwitterShare to FacebookShare to Pinterest