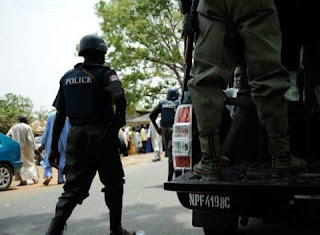 A 42-year-old self-professed prophet, Olusola Akindele of Lion of Judah Church of Christ, Robiyan community in Ifo Local Government Area of Ogun State, has been arrested for allegedly beheading his mistress for money rituals.

The Commissioner of Police, Ahmed Iliyasu, who led his men to the house of the cleric located in the community, said the suspect was arrested following a report by the community head.

Iliyasu said a headless decomposing body of a woman was found in an uncompleted building within the community.
The commissioner said the suspect confessed that the victim was his mistress, whom he simply identified as Iya Anu. They had been in an amorous relationship for over two years.

“On that fateful day, the deceased came to visit him and as usual after they made love, the woman was relaxing. He surreptitiously brought out a pestle-like wood with which he smashed the woman’s head and later cut off her head and two hands before he threw the remains into the uncompleted building behind his residence.

“The severed body parts were buried at the back of the church situated at number 13, Robiyan Avenue,” the commissioner told journalists.

He added that two other accomplices were arrested in connection with the killing.
Mr Iliyasu assured that the suspects will be arraigned after investigations were concluded.

Meanwhile, the police boss had ordered the DPO to liaise with the Chairman of the Local Government in order to demolish the property of the suspect.
on October 18, 2018
Email ThisBlogThis!Share to TwitterShare to FacebookShare to Pinterest