Four teams have already joined hosts Cameroon, in qualifying for the 2019 Africa Cup of Nations.
Madagasc 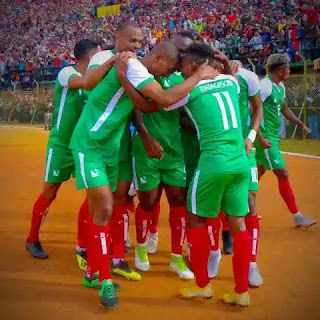 Madagascar qualified for their first ever AFCON, after beating Equatorial Guinea 1-0 at home on Tuesday.
They have been joined by Egypt, Senegal and Tunisia in the 24-team field for next year’s expanded finals.

Senegal won 1-0 in Sudan thanks to a late goal from Sidy Sarr, while Egypt beat eSwatini (formerly Swaziland) 2-0.
Tunisia claimed a 2-1 victory over Nigeria, to ensure the two North African powerhouses qualified from Group J. Firas Chawat scored both goals for Tunisia on his debut.

Uganda need a point from their last two qualifiers to reach the finals after beating Lesotho 2-0 away and Guinea are also on the cusp despite giving up a late goal and being held 1-1 in Rwanda.
on October 17, 2018
Email ThisBlogThis!Share to TwitterShare to FacebookShare to Pinterest