Former Chelsea boss, Antonio Conte does not want to move to Real Madrid because he wants to takeover at Manchester United. 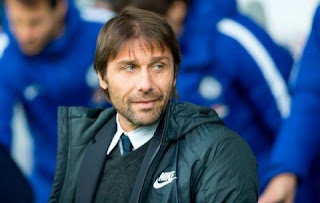 This is according to Italian journalist, Govanni Guardala, who claimed that although Real Madrid are tempting the former Juventus boss, he wants a move to Man United.

Real Madrid confirmed yesterday that the club has agreed to terminate the contract of head coach, Julen Lopetegui, after just 14 games in charge of the club.
Lopetegui was temporarily replaced with 42-year-old Real Madrid Castilla manager, Santiago Solari as they keep searching for a manager.
United boss Mourinho has been tipped to leave the club following their poor start to the new Premier League season.

Conte, so far, has emerged as the overwhelming favourite to take over the reins at Real Madrid.

But Guardala claimed that the Italian has instead cooled his interest at taking over because he likes the prospect of managing United.

“There are many rumours about his future,” Guardala told Sky Italia.
“Real Madrid is tempting him but Manchester United is a team that Antonio Conte really like
“There are players like Paul Pogba, whom he coached at Juventus, or Alexis Sanchez, Herrera and Lukaku, three players he’s always wanted to sign.
“At the moment nothing is decided with Real Madrid.”
on October 31, 2018
Email ThisBlogThis!Share to TwitterShare to FacebookShare to Pinterest