A fuel laden tanker exploded this morning beside the office of Department of State Security Services, DSS, and Ojo Barracks on Lagos Badagry Expressway.

At scene of the incident, Vanguard learned that the tanker fell as a result of the collapsed state of the road and spilled its contents on the road. 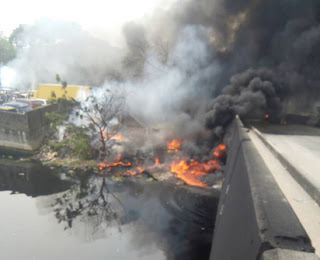 The impact of the fall resulted in the explosion of the tanker, in the process, other vehicles caught fire.

An eyewitness said the accident occured at 6: 45 am. No fewer than eight vehicles were consumed by the inferno, while an unspecified number of people, who were trapped in their cars were burnt.

Some people, who jumped out of their vehicles on sensing danger, sustained various degrees of injuries.

A woman, who jumped out of a moving commercial vehicle at the scene was seen crawling in the mud and was mistaken for a mad woman by a large crowd of sympathisers, who had gathered.
on October 02, 2018
Email ThisBlogThis!Share to TwitterShare to FacebookShare to Pinterest