A 14-year-old girl was hospitalized after she was raped by ten boys during a cult initiation in Nkpor, Anambra state.

According to a report sent in, the shocking incident happened last two weeks after the said girl decided to join the cult group and in the process, agreed to have sex with all the guys present during the initiation.

In the process of having sex with the cult guys, the young girl collapsed and was rushed to the hospital. 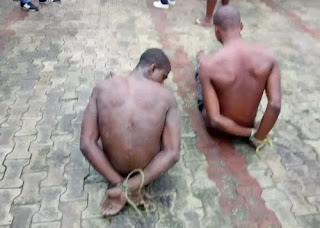 It was also revealed that some of the cultists who participated in the act, have been arrested while others are currently on the run.

This is not the first time an issue like this has happened.

Some months ago, the police in Enugu state made a startling revelation of how female students in Junior Secondary Schools in the state, are getting gang raped as part of requirements before joining different female cult groups in the state.

This was after 30 female Junior Secondary School students were busted by police while about to be initiated into different cult groups, Viron Queens/White Angels confraternities.